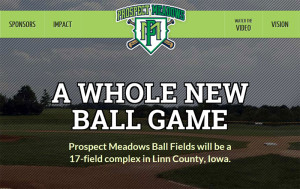 The Iowa Senate has taken a second swing at a bill that would provide a state sales tax rebate to a baseball complex in Linn County.

On Monday, the Senate rejected a proposal that could have awarded tax breaks to “Prospect Meadows” near Marion, plus as many as five other ballpark complexes. On Wednesday, Senators approved the bill after the tax break was scaled back and restricted to just two projects.

Senator Bill Dotzler, a Democrat from Waterloo, said the reconfigured bill calls for state economic development officials to screen the applications and award the tax breaks.

“The way the original bill was written, they would just automatically get it,” Dotzler said. “And that ain’t a right thing to do.”

“Prospect Meadows” is billed as a project that will bring in some of the nation’s top high school baseball players. Developers say baseball tournaments at the complex will attract scouts for professional and college baseball teams.

But Senator Mark Chelgren, a Republican from Ottumwa, said when legislators vote to give financial incentives to projects like this, it may not send the right signal to potential investors.

“These organizations, these lobbyists who come to us and say: ‘I really need you to do this so I can pitch my sale better,’ we are tacitly giving our endorsements to these,” Chelgren said.

After Senate action Wednesday, this tax break idea now goes to the House for consideration.