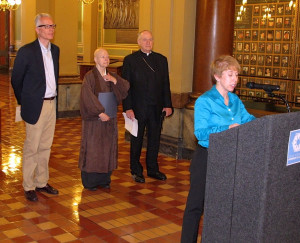 A group of religious leaders met at the statehouse today to issue “a call for action on climate change.” The event’s organizer was Reverend Susan Hendershot Guy, the executive director of Iowa Interfaith Power and Light.

“Our real focus has been primarily been around continuing our bipartisan support for clean energy in this state,” she said, “really as one way that we can work towards solutions.”

The group supports efforts in the legislature to boost state tax credits for solar energy, but Hendershot Guy acknowledged that isn’t likely to become law this year. Steve Mathonnet-VanderWell, pastor of the Second Reformed Church in Pella, said the group felt a “moral obligation” to raise the issue of climate change on the eve of Earth Day.

“We need to take this seriously and give resources to it and make it a bigger priority than it has been,” Mathonnet-VanderWell said.

There seems to be a spirited political debate between the two major political parties about whether urgent action on climate change is necessary, but Gerald Sorokin of the University of Iowa Hillel Foundation said he and the other faith leaders at the capitol today don’t have to “debate the fine points of theology” to find consensus on the issue.

“There’s nothing in a free market argument that says that we should allow the Earth to be destroyed by unguided and uncaring development,” Sorkin said.

Daishin Eric McCabe of Ames, a Buddhist monk, said he’s at the capitol to “make a statement” that political action on climate change is needed now.

“It feels like it’s going a little bit slower than I would prefer,” he said. “I think this is a really important issue that we need to make very clear steps toward addressing, so I’d like to see the pace on that pick up.”

There are other Earth Day Eve activities at the statehouse today. A noon-time event features an opponent of the Bakken Oil pipeline and advocates of a state sales tax increase to finance water quality initiatives.