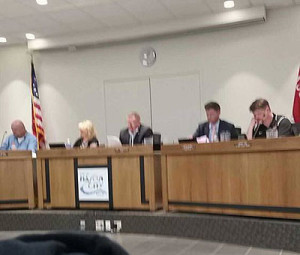 Following a near 7-hour marathon meeting, Mason City leaders voted early this morning to set the date for a public hearing on the development agreement between the city and Prestage Foods.

It’s part of the company’s proposal to build a $240 million pork processing plant on the city’s south side. The vote was not unanimous. Councilman Alex Kuhn was the lone “no” vote on the public hearing date, saying he can’t back the agreement.

“Looking at the letter we received today from Prestage, saying Mason City quickly emerged as the frontrunner due to the number of factors with particular emphasis on the site and supply of hogs,” Kuhn says. “That’s great. So, why do we have to give $15.5-million to get it? Everyone talks about having a win-win. If we want to plan and do this right, I think it can be done, but I don’t think it can be done subsidizing it to this level.”

Kuhn says he’s also concerned about the city shelling out incentives for the wages Prestage is proposing to pay its workers. “We talked about the United Food and Commercial Workers’ master contracts of $10.69 in 1980,” Kuhn says. “That’s before I was born. Now, in 2016, that same position is $13 an hour. The consumer price index has risen 175% while the wage has risen 20%. My point in saying that is, the company can pay that but we don’t have to give large government subsidies for that.”

Councilman Bill Schickel says it’s not an easy decision, especially with agriculture being the backbone of the Iowa economy. “The question before us tonight is, can we make the best, cleanest, most environmentally-friendly pork manufacturing center in the world?” Schickel says. “Can we or not? That’s what we’re discussing. My motion is to continue the discussion by holding our next public hearing, to listen to objections and then to work to resolve them.”

Councilman John Lee says he disagrees with those who say the council is moving too fast to deal with the problems cropping up. “We’ve talked about this and we’re addressing them,” Lee says. “If this goes through, how will we be hitting the ground? Because we’re going to have to hit the ground 100-miles an hour if not faster. People say you’ve got to slow this down. I’m not necessarily prolonging this because we can see what it can do to a community. If we just added 90 more days to this, ladies and gentlemen, it’s just going to keep steering up and up and up.”

Some 50 people addressed the council prior to the vote, with 31 speaking out against the Prestage proposal. The public hearing on the development agreement is scheduled to be held during the council’s May 3rd meeting. Prestage officials Wednesday announced they had agreed to include in the agreement a two-and-a-half mile buffer zone around Mason City, Clear Lake and the lake itself in which Prestage won’t build or operate any hog confinements or buy animals from a facility in the area.

The company also agreed to pay the Mason City School District $1.4 million over a 10-year span to help the system address potential growth.