You are here: Home / News / Branstad stays ‘neutral’ as Grassley, Ernst and Northey line up behind King 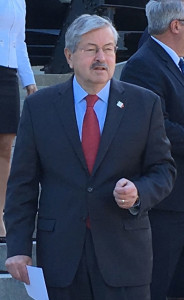 “I’ve been through primaries each of my last three elections,” Branstad said. “I think the most important (thing) is for the voters to make that decision. I don’t think endorsements make a huge difference and consequently I don’t intend to endorse in that primary or any of the other primaries, for that matter.”

Branstad and King had a very public falling out just before the Caucuses over ethanol, however. Branstad said he hoped Ted Cruz would be “defeated” in the Iowa Caucuses because of his opposition to the federal ethanol production mandate. King had endorsed Cruz and accused Branstad of making a “de facto” endorsement of Donald Trump. Branstad was asked today if he wanted “to see King defeated” in June.

“It’s up to the voters to decide in each of these instances and I’ve always had confidence in the voters of Iowa to make a good decision and I will obviously support the Republican nominees,” Branstad said during his weekly news conference.

It appears some Democrats in the fourth congressional district plan to switch their party registration and be a “Republican for a day” in order to vote against King and for Bertrand. Branstad said he faced the same issue in 1994 when Republican Congressman Fred Grandy ran against Branstad for governor.

“I think over 30 percent of the people that voted in Polk County in that were not Republican the day before the election, so the ability to change your registration before the election or on Election Day is something that’s been around for a long time,” Branstad said. “I think that’s just a fact of life that you have to recognize under the Iowa system.”

Branstad’s top political contributor is backing Bertrand. Bertrand is commercial property developer who won his second term in the Iowa Senate in 2014.