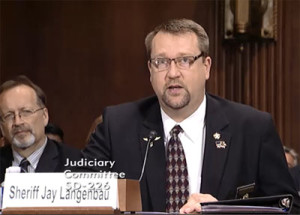 Worth County Sheriff Jay Langenbau was in Washington, D.C. today to testify before the U.S. Senate Judiciary Committee about the delay in receiving federal public safety officers benefits for his wife.

He was invited by Iowa Senator Chuck Grassley, the chair of the committee, to tell his story.

Langenbau explained how his wife, Shelly Lair-Langenbau, was a flight nurse who died when the aircare helicopter she was on crashed after leaving Mercy Hospital in Mason City for a call on January 2nd 2013.

“Shortly after Shelley’s death, I was told about the Public Safety Officers’ Benefits program. So, I started filling out the application for the PSOB death benefit. I also contacted Mercy Hospital, local law enforcement and the National Transportation Safety Board (or NTSB) to get the information needed for the PSOBbenefit application,” Langenbau testified. “By March 2013, after approximately one month of gathering materials, I had everything I needed, including a preliminary report from the NTSB.”

Langenbau continued to wait while the NTSB completed its report. “It took two years for the NTSB final report to come out, on February 3rd, 2015. As a Sheriff and law enforcement officer, I fully understand the need to get the facts right, and I also understand that getting the facts right takes time,” Langenbau says. He says he waited five months to give the PSOB officials a chance to process the report.

“Much to my surprise, I learned that not only was my PSOB application still pending, but also that PSOB had only recently begun the process of verifying basic, clerical information that I had submitted two and half years ago – – information like dates, Social Security numbers, and statements regarding Shelly’s relationship to her two stepsons. It seems to me like this type of information is something that DOJ could’ve checked on at the very beginning of the process when I first submitted the application,” Langenbau saus.

He says in an effort to help move the process along he contacted Mercy Hospital himself to try to get the information requested and sent it in within two weeks. Three months later, on October 14th, 2015, he received an email from a Department of Justice

“Chairman Grassley and honorable members of this Committee , I am concerned about the time it takes for beneficiaries like me and my children to access PSOB benefits,” Langenbau explained. “I am also concerned that DOJ may be making applicants submit redundant papers and wait unnecessarily, by not even beginning the process of confirming basic clerical information, while it waits for findings from other agencies, like NTSB — as they did in my case.”

After a few more months, he checked back and was told he needed to send them documents he had already sent. Langenbau sent the documents two days after talking with federal officials. He was told to keep checking back and his last contact was on April 4th and is still waiting.

“Personally, my family and I have been graciously, humbly and patiently awaiting this benefit for over three years. Professionally, I know there is this great benefit for me, my fellow law enforcement officers, my fellow firefighters, my fellow ambulance members, and all Emergency Services personnel. Knowing that is benefit is out there, helps to ease the stress and burdens of adjusting to a new life, especially in the first few months following a tragedy like the death of a loved one,” according to Langenbau.

He asked the Senators to help him cut through the red tape. “Any assistance you can offer in expediting the process to receive this benefit would be greatly appreciated by me, my family, and others who have shared in similarly challenging experiences,” Langenbau says. Langenbau says he would like to be able to tell other public safety officers that there is a benefit that they can receive in a few months, rather than three years.

Senator Grassley issued a statement that says the situation at the PSOB Office has gone from bad to worse. The Republican Senator’s statement says the DOJ has spent more than $22 million on outside contractors to help speed up the claims process and it has clearly not helped. Grassley says the $22 million is enough to pay the death benefit to 63 families of fallen safety officers. “That seems like awfully expensive paper pushing.”