You are here: Home / Sports / FootGolf gaining popularity in Iowa 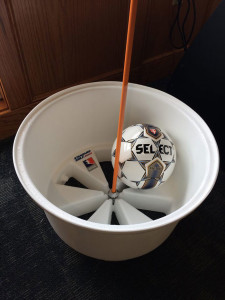 Alex Rich of West Des Moines is working to promote the game. “FootGolf is a combination of soccer and golf. It’s more heavily related to golf. Just like the traditional round of golf, you tee off at the tee marker and (kick) the ball until you get it in the hole, in the least amount of strokes as possible,” Rich says.

FootGolf, which involves a soccer ball and a 21-inch diameter cup, is growing in popularity throughout the United States. “I know the (U.S.) women’s soccer team just played Japan’s team in a charity outing for FootGolf, so it’s slowly picking up. I think it’s been around for about five years, but it’s starting to get that viral traction online and people are starting to hear about it,” Rich says.

There are now at least five FootGolf courses in Iowa that are registered with the American FootGolf League. Rich is helping open the latest course, located in Norwalk, later this month (May).

The 27-year-old Rich is an assistant soccer coach for Urbandale High School and he plays with the Iowa State Soccer Club. Rich says FootGolf provides a way for kids to hone their soccer skills, but in a different setting. “We’ve talked about having our high school varsity boys come out, just to get off the soccer field, have some fun with each other, as well as building skills…accuracy, distance, how to strike a ball, where to place it, and things like that all come into play when actually playing the sport of FootGolf,” Rich says.