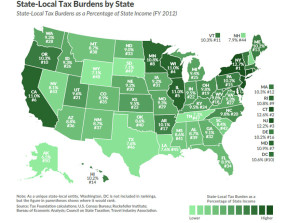 First, Iowa’s income taxes look higher than they actually are because of a rare tax deduction. Iowans get to deduct how much they’ve paid in federal taxes before calculating their state income taxes.

“On paper, Iowa looks like it actually has some of the highest taxes you could possibly face in the country and that’s a competitive disadvantage,” Jared Walczak of the Tax Foundation told Radio Iowa this morning.

Getting rid of that deduction is the top recommendation in his report. Iowa’s income tax system has nine tax brackets, too. The Tax Foundation outlines a few alternatives, including one “flat” rate of 5.8 percent for all taxpayers. In addition, the foundation’s report suggests Iowa’s property tax system should be dramatically simplified.

“Taxes in Iowa are too complex,” Walczak said. “On the property tax, very few people have a good sense of what they will be paying from year-to-year. On the individual income tax, no one really understand what the effective rates that they’re subjected to are. Complexity has its own costs.”

The report outlines “revenue neutral” proposals, meaning the same amount of taxes would be collected by the State of Iowa after the proposed changes. Walczak said that’s different from the approach used in Kansas. Lawmakers in Kansas dramatically reduced taxes altogether without making similar reductions in state spending and they’ve been grappling with deficits ever since.

“Our first objective is what can we do structurally that will help our tax code become simpler and more fair, that doesn’t have a fiscal impact,” Smith said.

The group analyzed all the taxes the state collects, including sales taxes. It recommends ending current exemptions for a long list of goods and services. For example, you pay sales taxes when you buy a television, but not an airplane in Iowa. Walczak said there’s “no good economic reason” to exclude airplanes from the state sales tax.