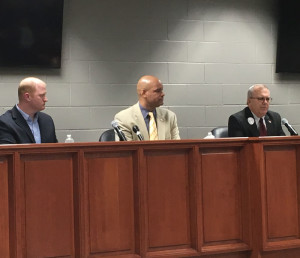 The three Democrats seeking their party’s nomination for Iowa’s third district congressional seat agreed on each issue raised tonight in a forum hosted by the Iowa Asian and Latino Coalition.

The three candidates favor public financing of elections, a hike in the federal minimum wage and a requirement that businesses continue to pay workers who are out on maternity leave. They all oppose the idea of mass deportation of undocumented immigrants and they support efforts to expand the influence of unions.

It was when they told stories about their backgrounds and how they would campaign against Republican Congressman David Young that differences emerged. Desmund Adams of Clive is a high school dropout who wound up earning a teaching degree and a law degree. He touted his ability to “build coalitions.”

“To be able to reach across aisles by not only aisles politically, but aisles both ethnic, racial, cultural, economic, business, workers,” Adams said. “It’s going to require that in order for us to win this seat back.”

Jim Mowrer touted his experience running unsuccessfully against Congressman Steve King in 2014. Mowrer told the crowd he understands how to govern after working in the Pentagon and Mowrer closed the forum by suggesting his two Democratic rivals were ill-equipped to run against Young.

The third congressional district covers 16 counties in the southwestern quadrant of the state. Young is seeking reelection to a second term.