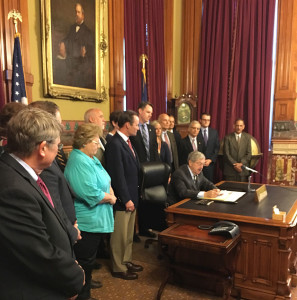 Governor Terry Branstad signs thebill in his formal office at the state capitol.

“This is a significant piece of legislation for several reasons,” Branstad said during a bill signing ceremony in his formal statehouse office.

The new law will give judges more discretion in sentencing people convicted of a robbery, plus some non-violent drug offenders may be released from prison early. Branstad said those are “reasonable” reforms and he’s praising the state’s legal community, justice system and legislators for coming up with the compromise.

“It not only highlights our state’s ability to work cooperatively, but also our desire to better serve the people of Iowa,” Branstad said.

Nearly 10 percent of the black men in Iowa are either in prison or on parole. Arnold Woods, Jr., the president of the Des Moines branch of the NAACP, called the legislation a “great first step.”

“It’s a new day in our country as far as law enforcement is concerned, the legal system and how to deal with non-violent crime,” Woods told Radio Iowa. “And we’ve come to discover most people who commit non-violent crimes, especially those consistent with robbery, they feel they have no other choice. There are some people who do it because they want to do it, but there’s a lot of people who steal a loaf of bread because it’s the only way they can get a loaf of bread.”

The bill Branstad signed today also makes the sentences for child endangerment tougher and children who’ve been abused will have a longer period of time to report the crime.