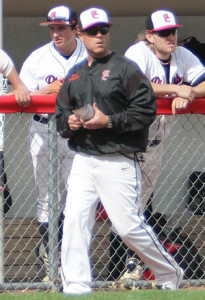 Grinnell College will try to win a first Midwest Conference baseball championship beginning Friday in De Pere, Wisconsin, with the start of the conference tournament.

The Pioneers won the South Division title for the sixth time in seven years but they have never won the league title.

“We put undo pressure on ourselves”, said Grinnell coach Tim Hollibaugh. “If we go in and play like a bunch of fun loving, goofy guys that are very talented in baseball then we are going to be successful. We have been close a lot and it is going to happen. I just hope it is sooner rather than later.”

Hollibaugh says the Pioneers are entering the tournament with the right mentality. They swept a doubleheader from Cornell on the final day of the regular season to win the division crown. They open the double elimination tournament by taking on North Division runner-up Beloit College.

“We are mentally and physically ready and if we are the best baseball team it will work out in our favor.”

Cornell plays North Division champ and host St. Norbert College in the other first round game.

Chris Varney from KGRN contributed to this story