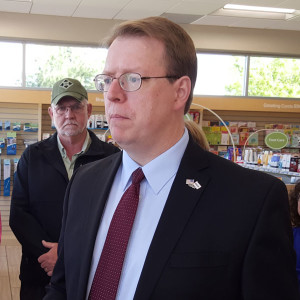 A Democrat who is hoping to challenge U.S. Senator Chuck Grassley in November is calling on the Republican to clear the way for a vote on making marijuana more readily available for medical use.

“It is time for Senator Grassley to put aside the delay and the gridlock,” Hogg said. “This is something Americans across our state and our country want him to act on.” A spokesperson for Grassley’s office issued a statement to Radio Iowa saying Grassley has “serious concerns” with the bill because it “could be a pathway for those who want broad legalization of marijuana for all purposes.”

Hogg spoke about the bill, known as the CARERS Act, at a pharmacy in Urbandale. He was joined by supporters of the bill, including the parent of a child who have epilepsy and a patient who suffers from chronic pain. “Who are we to say no? Who is Senator Grassley to say no? It’s time to say yes to people who want the opportunity to try medical cannabis to alleviate their medical conditions,” Hogg said.

Maria La Franz of Des Moines has been lobbying lawmakers for several years now, hoping to legally obtain cannabis for her son, who suffers from severe epilepsy. “Seventy-eight-percent of Iowans want the option for medical use of the cannabis plant,” La Franz said. “Some of our children in Iowa are benefitting from cannabis, but we are still — federally — breaking the law.” The figure La Franz cited comes from a Des Moines Register Iowa Poll released in March. It found 78 percent of the Iowans surveyed favor allowing people to use marijuana as medicine.

Hogg, who has been a member of the Iowa legislature since 2003, is one of three Democrats seeking their party’s nomination for the U.S. Senate in 2016. The other candidates are Bob Krause and Tom Fiegan, who both also ran for the Senate in 2010, but lost to party nominee Roxanne Conlin in the primary.

Because of Senator Grassley’s work, federal agencies are conducting scientific and medical analysis of cannabidiol to see if there is a scientific basis to change its schedule, and agencies have eased some of the regulatory barriers to cannabidiol research. Senator Grassley believes the government has to ensure both public safety and the effectiveness of drugs available for patients, but at the same time, it shouldn’t delay medical innovations that could help children or others. The CARERS Act goes far beyond the issue of cannabidiol for epilepsy-suffering patients. It would make access to recreational and smoked marijuana much easier for many people through sweeping changes to federal marijuana and banking laws. Among other things, it would place all medical marijuana authorized by state law (as well as all cannabidiol oil derived from the marijuana plant) outside the purview of the Controlled Substances Act.

The bill could be a pathway for those who want broad legalization of marijuana for all purposes. With marijuana users being much more likely to take up heroin and other serious drugs than non-users, and with more infants being born with marijuana exposure lately, Senator Grassley has serious concerns with recreational marijuana legalization and legislation that would pave the way for such legalization.