You are here: Home / Human Interest / Census shows Le Roy is the smallest city, Des Moines the largest in Iowa 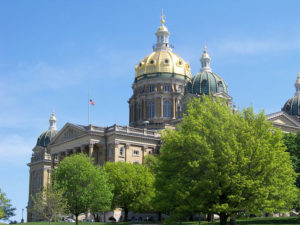 Des Moines, which is the home of state government, remains the largest city in the state according to Census Data.

The Iowa city where most of state government is located continues to have the largest number of people living there.

“Waukee continues to grow at a pretty good rate. Some of the smaller communities are right there behind them, with Tiffen, Bondurant, Grimes and Polk City being in the top five growers as far as cities go,” Krob says. Waukee grew by nearly 38 percent from 2014 to 2015. Cedar Rapids has the second largest overall population in the state, followed by Davenport, Sioux City and Iowa City. There are 11 cities in Iowa with a population over 50,000, but Krob says many Iowans choose to live in a city that is smaller.

Since 2010, 224 Iowa cities have gained population, 53 cities had no change, and 635 cities lost population. “The population growth we are seeing in Iowa, we have been seeing again over the last 20, almost 30 years now. It’s a slow, steady growth. We don’t gain population rapidly, but we do gain population every year,” Krob explains.”The metropolitan areas tend to be the areas that gain population, while your rural areas are the ones that are losing population.”

Le Roy in southern Iowa’s Decatur County barely inched above one dozen residents to hit 14 and is the smallest city in the state. Beaconsfield is second smallest at 15. The state did lose one city in 2015 — Center Junction in Jones County.

You can see where you city ranks on the State Data Center’s website at: www.iowadatacenter.org/data/estimates/2015.