You are here: Home / Fires/Accidents/Disasters / State to release wasps in Jefferson County to attack the emerald ash borer 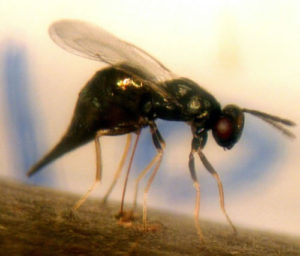 Wasps like this one are being released to try and kill the emerald ash borer.

Thousands of tiny wasps will soon be released in southeast Iowa’s Jefferson County which state ag officials hope will help to battle the destructive emerald ash borer, or EAB.

Mike Kintner, the state’s EAB coordinator, says two types of the stingless, parasitic wasps will be turned loose near Fairfield, but each one is only about the size of a grain of rice or a gnat. Kintner says it marks the first time these natural enemies of the EAB will be released in Iowa.

“This has been going on in other states primarily where EAB has been hitting their state harder,” Kintner says. “We’ve gotten to the point in Iowa now where U.S.D.A. thought it would be appropriate for us to start doing these releases, based on some of the numbers we’re seeing here in our state.” The EAB is confirmed in at least 31 Iowa counties, though Kintner says it’s likely in more.

He says there’s no threat from the wasps, unless you’re an ash borer. “These parasitic wasps are very small,” Kintner says. “When people hear the word ‘wasp’ they kind of get concerned or alarmed, but they pose no danger to either humans or pets.” The thousands of wasps will be released in Whitham Woods, near Fairfield, over the next few weeks but it may be many months or years before we’ll know if they’re doing their job.

“The program we’re doing is basically a four-year program just for at that site,” Kintner says. “The first couple of years involve releases and then after that, for a couple of years, there’s a lot of monitoring going on. We’re going to definitely expand, not just in the Fairfield area, but at other sites as they come along in Iowa, too, that seem opportune to release them.”

Kintner refers to the wasps as “beneficial” insects but admits they may accidentally kill off bugs other than the EAB in Iowa.

“U.S.D.A. has done a lot of research and testing in the labs on these parasitic wasps,” Kintner says. “There are a couple of native related species that are kind of related to emerald ash borer that they do have a little bit of an impact on, but again, not enough to keep us from releasing them into the wild.”

The wasps are native to Asia and have already been released in 23 other states to battle EAB populations. They’re being provided to Iowa for free through a U.S.D.A. facility in Michigan. The wasps lay their eggs inside EAB eggs and larvae, killing them before they can develop and in the process, producing more wasps.