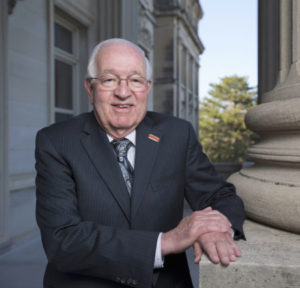 An administrator at Iowa State University in Ames is entering the final month of work that will cap off a half-century-long career.

Warren Madden graduated from ISU in 1961 with an engineering degree and left to go into private industry. He returned in 1966 for what he thought would be a short stint when his former advisor suggested he take a job with the school.

“Beverly my wife had started a graduate degree here at Iowa State when we had been here but hadn’t finished it. So, we thought this would be an opportunity to come back for her to complete her degree, and for me to work in the university and see how that went. I think at that time our thought was that we’d spend a couple of years in Ames,” according to Madden. The couple of years will culminate with Madden’s retirement at the end of June as a senior vice president at the school.

Moving from school to school to advance your career is common in the academic world — and Madden says he had other offers through the years — but decided he was in a the right place. “This is a very special university and a very special state, and I have been given an opportunity to work on a variety things which I have enjoyed,” Madden says. “And for Bev and I Ames has been a great community to live in, a great community to contribute to and participate in.”

Madden’s worked under five permanent and two temporary university presidents in the business office, and had a hand in all the major projects as the campus expanded. One of the key programs he worked on was taking the bus service from a system with one bus at ISU and one or two in the city of Ames and linking them together into what is known as Cyride.

“Today we now have I think 86 buses operating and we will be transporting more than seven million riders this year. So, it is one of the most successful transit systems in the country for communities of our size,” Madden says. He’s overseen the building of one-third of the campus dorms and other facilities in his time at ISU.

He says the development of the Iowa State Center, Jack Trice Stadium and Reiman Gardens and the rest of the south campus are some of the things that have changed the university as much as anything and something he’s enjoyed being a part of. Dealing with budget cuts is one of the toughest things Madden says he’s faced in the job. The university police department is under Madden’s jurisdiction and he says dealing with the problems that arise, sometimes including the deaths of students, also was tough.

Madden was out on the streets trying to help quell the various riots that errupted with the annual VEISHEA celebration. He was nearly hit by a brick tossed at a patrol car one night as he tried to get students to disperse. Madden supported the eventual decision to cancel the event.

“You know it’s challenging, but circumstances and student interests change. And I think VEISHEA was one of those events where we weren’t able to figure out a mechanism of continuing to have it function to meet its orginal purposes,” Madden says, “and we ended up with the difficulties we had. In most cases not caused by Iowa State students, but by other people coming into the community.”

Flooding also posed problems on campus for the very buildings in the Iowa State Center that Madden cited as a key change on the campus. “One of the positives was how the university community rallied and we recovered,” Madden says. He says he continues to be amazed at how the staff responded to the flood challenges.

ISU’s enrollment was a little more than 15,000 when Madden joined the staff in 1966. It is now close to double that size. Madden says the new students arriving every year is one of the things that kept the job interesting.

“You get one more year older, but they all look the same because its another group or 18 year olds, plus or minus. And that provides an energy level. And in one sense, each fall it’s sort of a new start for another new year,” Madden says. He says it is rewarding to talk with former students when they return to campus and learn about the impact the school has had on them.

Madden is 77 and says he plans to stay in Ames once he retires. He says he’s had a number of community organizations approach him since he announced his retirement and asked him to help them out. “I will take some of those on, I’m being a little bit careful here before I say yes to everything,” Madden says. “I obviously want to continue to be an Iowa State fan and supporter, and hope to continue to follow Iowa State athletics.”

Madden will be honored at a retirement reception on Friday, June 24, in Benton Auditorium, Scheman Building. The program begins at 4 p.m.