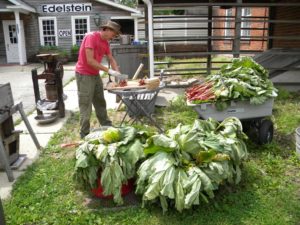 A tart vegetable that’s unique to the Midwest is the focus of at least a couple of celebrations coming up in Iowa.

Manchester will hold its 7th annual Rhubarb Fest this Saturday, June 4. Jack Klaus, with the Manchester Chamber of Commerce, admits his town doesn’t have a historically significant tie to rhubarb.

“We have communities around us that have strawberry festivals and pumpkin festivals, so we didn’t want to steal somebody else’s idea, and yet we were looking to have something of our own,” Klaus told Radio Iowa.

While rhubarb is a vegetable, its stalks are often prepared like a fruit and cooked with sugar in pies and other desserts. The rhubarb food stand in Manchester, however, will feature rhubarb brats. “We have a locker in the nearby town of Edgewood that is quite known for their skill and talent,” Klaus said. “So, it wasn’t hard for us to think, ‘what else can we do with rhubarb? Let’s see what they can do with rhubarb brats.'”

The Amana Colonies will also celebrate all things rhubarb on June 4.

David Rettig is executive director of the Amana Colonies Convention and Visitor’s Bureau. “The Amana Colonies are kind of famous for rhubarb,” Rettig says. “There are so many things in our cuisine that are made out of rhubarb.”

This will mark the second year for the Rhubarbfest in the Amana Colonies. Attendees are encouraged to wear pink, as that’s one of the primary colors to the rhubarb stalk – along with crimson red and green.