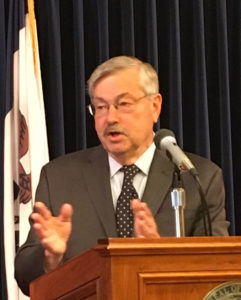 Governor Terry Branstad is defending the closure of the state-run Psychiatric Mental Institute for Children (PMIC) in Independence.

“When this was opened, there were no other PMIC beds available,” Branstad says. “There are now 400 more throughout the state.”

Branstad says there are no children or teenagers in the 15-bed unit for several months and the Iowa Council on Human Services recommended it be closed.

“The legislature did not provide any funding for it, so this was something to be expected and it’s part of the overall change that’s going on in the way we deliver mental health…We’re providing these services closer to home in more settings. Companies like Four Oaks and Tannager Place do provide these services,” Branstad says. “to get this service.”

State Senator Brian Schoenjahn, a Democrat from Arlington, says Branstad engaged in “deliberate sabotage” and made a “unilateral decision” last year to close the unit.

“The reason it was no longer being used is because the staff was ordered not to take any new patients,” Schoenjahn says.

Schoenjahn represents the Independence area in the state senate. Schoenjahn says closing the unit means the loss of 10 “good jobs” and he says the state-run unit offered services to mentally ill kids that were “superior” to what’s available in the private sector.

“That’s a real loss to the kids, their families and the people of Iowa,” Schoenjahn says.

The Branstad Administration says there were only 15 patients transferred to the unit between July 1, 2014 and June 30, 2015.

“When this unit was started…20-some years ago…we didn’t have those private sector beds, those non-profit beds, but we do today,” Branstad says. “They’re closer to home. We believe that they can better provide the service.”

Layoff notices were sent last Thursday to the 10 people who worked in the unit. State officials say the cost of treatment for patients was more than $1000 a day in Independence, compared to about $215 a day in a private setting.