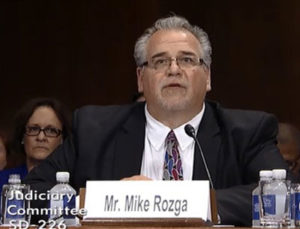 A central Iowa man whose son killed himself after smoking a legal drug testified before a U.S. Senate panel in Washington D.C. this  morning, pleading with lawmakers to find a way to make such drugs illegal.

Mike Rozga of Indianola, says his 18-year-old son, David, smoked the synthetic marijuana known as K-2 with friends and had a terrible reaction.

“He told the boys he felt like he was in hell,” Rozga says. “I want to stress the significance of that statement, because as a Christian young man, hell represented the very worst place David could ever imagine. This was far and away the worst, scariest, evil thing he had experienced.”

Rozga says they later learned the drug could bring on horrific hallucinations and the feeling you were being chased by demons or Satan himself. Hours after smoking the drug, David fatally shot himself. Coincidentally, that was six years ago last night.

“We saw nothing in David to indicate he was depressed, much less suicidal,” Rozga says. “He had just graduated high school and was on Cloud 9, looking forward to his summer and to attending the University of Northern Iowa that fall. The police investigation into his death also concluded David was not suicidal and that he had had a severe reaction to the drug.” Numerous laws have been passed at the state and federal level banning synthetic narcotics, but drug makers can simply make a small change in the recipe, rebrand it, and return to selling it in malls and convenience stores.

“The people manufacturing and distributing these drugs are excellent marketers that hide behind false advertising and have successfully used our own laws against us,” Rozga says. “Quite simply, these people are murderers who knowingly sell poison for their own financial gain.” Rozga told the members of the Senate Judicial Committee that he’s given many talks about the synthetic drugs since his son’s death in 2010 and he’s stunned by the parents who say they’ve never heard about them.

“We need to start educating parents in our communities on the dangers of these synthetic drugs,” Rozga says. “I know ‘the war on drugs’ is not a popular phrase to use today, but for those of us fighting in the trenches, I don’t know what else to call it. We are in a battle for our children, grandchildren, schools and our communities.” DEA officials say most of the synthetic drugs in the U.S. are made in China and reach the U.S. either through the mail or across the Mexican border.