Forecasters say a heat wave will wash over Iowa today that will likely last through the weekend, with steamy high temperatures in the 90s — and the heat may doom many pets.

Josh Colvin, with the Animal Rescue League of Iowa, expects they’ll average five calls a day alerting them to animals that are locked inside hot cars.

Sad but true, he says, hundreds of cats and dogs die needlessly every summer by being left inside cars. 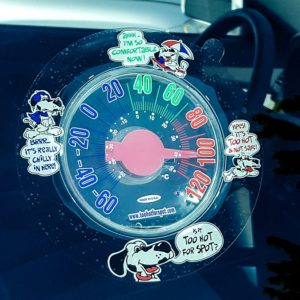 This window-cling thermometer was placed inside a car this morning and quickly shot over 100 degrees.

“People are on the fence, ‘Well, I don’t want to call on my neighbor,’ because they just don’t want to do that,” Colvin says, “but if they’re really concerned that the animal is in danger, we really encourage people to call us.” Colvin says the situation can rapidly become lethal.

“If we’re talking about animals in vehicles, with weather like today, tomorrow and this weekend, it can become critical very quickly, in a matter of minutes to be frank,” Colvin says. “We’ve really got to respond to those calls quickly.”

Pets should never be left unattended in a car when the temperature is more than 70 degrees, even for a few minutes. When it’s 80 degrees, the temperature inside a car can reach 99 degrees or hotter within ten minutes, and leaving windows cracked does very little to lower the temp.

Colvin reminds people to act immediately if they see a distressed animal in an unattended car. In Des Moines, residents can call the ARL at (515) 283-4811. Elsewhere, Iowans should call local law enforcement.