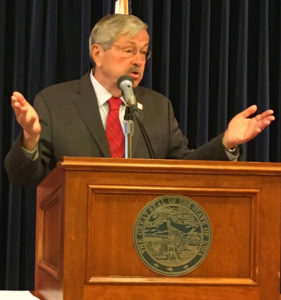 “I am disappointed that the president continues to be in denial of the extent of this threat,” Branstad said this morning. “And it’s very serious and it’s occurred time and time again, now, in this country and I don’t think we can continue to be on the defensive.”

“I think we have to go after them in a much more dramatic way where they are in Iraq and Syria and Libya,” Branstad said, “and other countries.”

Branstad, like Donald Trump and many other Republicans, is faulting Obama for failing to label the shooter in Orlando as an “Islamic” terrorist.

“We have a president that has not taken the threat seriously and we need to change that,” Branstad said this morning, as he pounded the lectern. “We need new leadership in this country.”

The shooter in Orlando was reportedly on a terror watch list for a couple of years and interviewed by the FBI after co-workers reported strange and threatening behavior. Branstad told reporters this is “not a criminal matter” — it’s a war — and the federal government to be more “vigilant” in identifying domestic terrorists “and not be so concerned about political correctness that we don’t aggressively investigate those people who are saying things that threaten other Americans.”

Branstad said it’s time for a “serious review” of the procedures for dealing with people who are making threats — but Branstad is not going so far as to call for denying gun permits to legal citizens like the Orlando shooter who have been interviewed by the FBI or who are on the federal government’s watch list. This past December Iowans Chuck Grassley and Joni Ernst along with all the other Republicans in the U.S. Senate voted on this issue, rejecting a proposal that would have forbidden FBI terror suspects from legally buying assault weapons and explosives.