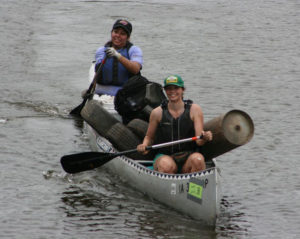 A deadline is approaching for Iowans who want to spend part of their summer vacation cleaning up a river in southeast Iowa.

Lynette Seigley is coordinator of the DNR’s annual volunteer event known as Project AWARE, which stands for A Watershed Awareness River Expedition. The focus of this year’s effort will be on the lower Des Moines River between Eldon and Farmington.

The expedition, scheduled for July 11-15, marks Project AWARE’s first time in southeast Iowa in a decade. “The last time that Project AWARE was down in southeast Iowa was on the Iowa River, I believe in 2006. So, this was a corner of the state that we wanted to get back to,” Seigley says. Around 300 volunteers typically preregister for Project AWARE and many will spend the entire week on the river.

“We have some pretty dedicated volunteers who come back year after year,” Seigley says. “In fact, we’ll be recognizing a few for 10 years of being involved in Project AWARE.” This marks the 14th year for Project AWARE. Last year, over 400 volunteers paddled and cleaned 65 miles of the Wapsipinicon River through Buchanan, Linn and Jones Counties in eastern Iowa. Seigley says those volunteers pulled 30 tons of trash from the river, mostly tires and scrap metal.