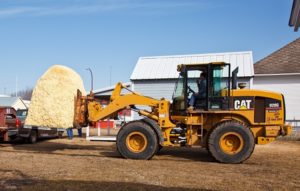 Residents in the northwest Iowa town that calls itself the Popcorn Capital of the World plan to cook up a massive popcorn ball later this week to reclaim the title of world’s largest popcorn ball.

“The Indiana State Fair built a popcorn ball last year during their fair at 6,500 pounds,” Phillips says. “That certainly surpassed our 5,000-pound record. This year, we’re going to attempt to make an 8-to-10,000-pound and I can tell you, the reason there’s a gap in there is because when we get so aggressive at building a popcorn ball, sometimes we don’t stop when we should.”

It’s anticipated the new record-setting popcorn ball will be 10 to 12 feet tall. A larger building is being constructed in Sac City just to house it, Phillips says, and a small army is being assembled to create the enormous sphere of popcorn on Saturday.

“Last time, it took us 12 and a half hours and it took 253 volunteers,” Phillips says. “We’ll take all of the volunteer help we can get that wants to punch and pack popcorn that day.” 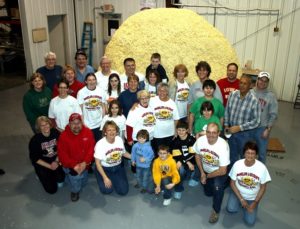 Volunteers with the 2009 record holder.

The final weight will be verified by an Iowa Department of Transportation scale but she notes, before it comes to that, it’ll be a complicated process to create to world’s largest popcorn ball.

“The Noble Popcorn plant here in Sac City makes and sells flavored popcorn and they have these huge cookers that’ll cook 60- to 65-pound batches at a time,” Phillips says. “What they do is mix up the sugar and the syrup — it has to be an edible recipe — to make the flavored popcorn and then it dumps out onto a conveyor belt which we grab in big buckets and we start punching and packing into a popcorn ball shape.”

Sac City first created the world’s largest popcorn ball in 1995, weighing 2,225 pounds. That record was later beaten and another record-setter was created in 2004, tipping the scale at 3,100 pounds. Again, someone built a bigger one and Sac City created its most recent 5,000-pound popcorn boulder in 2004.

Phillips says popcorn was introduced to growers in Sac County in 1885.