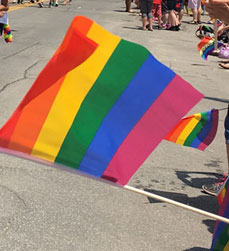 Hundreds of central Iowans attended a vigil last night in Des Moines to mourn the lives lost in Sunday’s mass killings at a gay nightclub in Orlando, Florida.

Politicians, civil rights leaders and local clergy paraded to the mike to call for an end to what they called senseless violence in America.

Deanna Edwards of Des Moines had family reasons for being in the crowd. Edwards says, “I have a son who is gay and so it hits close to home, it could have been my child.” She says she feels a mix of emotions in the wake of the shootings. She’s sad, angry and scared, and says assault rifles should be outlawed because their only purpose is to kill.

Des Moines resident Tony Khuth attended the vigil. Khuth used to live in Orlando and says he went to Pulse almost every night and he knew one of the victims.

“I never thought that a place that I went to would be a place that something like this could happen,” Khuth says. “I just wish there were more strict gun laws.”

One Iowa, the state’s largest advocate for LGBT rights, organized the gathering in the sculpture park in downtown Des Moines.