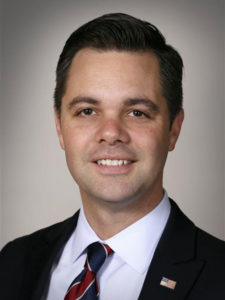 A 37-year-old state representative from Bondurant has been called to active duty for service in Maryland then South Korea.

Republican Representative Zach Nunn is a major in the Iowa Air National Guard’s 132nd Wing in Des Moines. His 90-day deployment will last through September.

He’s been on active military duty three times before, with the U.S. Air Force, in Iraq and Afghanistan.

His specialty is cybersecurity and counterintelligence. Nunn was elected to the Iowa House in 2014 and he’s seeking reelection to a second term this fall.