You are here: Home / News / Some Sanders delegates switch to Clinton at IDP’s state convention 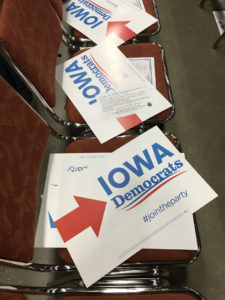 “If all things go according to plan, Hillary Clinton will win the state of Iowa,” Sean Bagniewski, a Clinton organizer, said this afternoon.

Ten of Bernie Sanders’ delegates at the state convention switched over to Clinton today. Mitch Henry of Des Moines, a leader in the Iowa chapter of the League of United Latin American Citizens, had been a Sanders delegate until this afternoon.

“Our number one target here is to defeat Donald Trump this fall and with Hillary Clinton our presumptive nominee — I mean, that’s going to happen at the national convention — I think it’s about time for us to get together and work as a party, as a whole,” Henry said.

But Sanders supporters like Sara Hinds of Cedar Rapids are holding out hope “super delegates” who back Clinton will change their minds after civil protests in Philadelphia.

“Just a lot of hope for a miracle story, you know, a happy ending,” she said this afternoon.

“I know that we are ready to take on every race that we need to in November,” McGuire said this morning.

Clinton and rival Sanders had nearly equal numbers of delegates eligible to attend Saturday’s state convention in Des Moines (704 for Clinton and 700 for Sanders), but by the end of the day about 56 percent of the party activists gathered for their state convention were aligned behind Clinton. Here are the final eligibility numbers: 714 Clinton delegates and 571 Sanders delegates were seated for the state convention.

Congressman Dave Loebsack, a Democrat from Iowa City, will be a “super delegate” supporting Clinton at the national convention, but he acknowledged many Sanders’ backers aren’t yet ready to switch yet.

“But please, let’s get together come July, so that we can have a Democratic president,” Loebsack said in his remarks to convention delegates this morning.

Thirty-two-year-old Caleb Humphrey of Madrid, an Army veteran who did two tours of duty in Iraq, is a national convention delegate supporting Sanders.

“Hillary Clinton voted for me to go to war and now I have a chance to vote her out,” Humphrey said.  “…Bernie has a little flame…not only within this party, but with independents alike and that needs to be recognized.”

Nineteen-year-old Joshua Hughes, a member of the Interstate 35 School Board, is a national convention delegate for Clinton.

“I want to be able to, looking towards the fall, to be able to reach out to my peers that are young and be able to advocate for Hillary that I think, being a delegate gives me a little bit extra leverage,” Hughes said.

Clinton and Sanders supporters separated into different rooms in mid-afternoon to determine which state delegates would win the nine “at-large” delegate slots to the national convention. Clinton has five and Sanders four at-large delegates from Iowa. Twenty-nine other Iowa delegates were elected at congressional district conventions at the end of April.  Hour 10 of the Democrats’ state convention began at 7:30 p.m. with the two delegate groups continuing to meet in separate rooms.

(This story was updated at 7:30 p.m. with additional information)