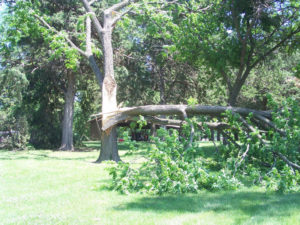 Several hundred trees were toppled in Le Mars after strong winds swept through the city Friday, blocking nearly every street in the city.

The storm knocked out power to nearly 1,700 homes and businesses.

The sound of chain saws could be heard throughout the town of Le Mars over the weekend. Winds with speeds of at least 68 mph were reported on Friday evening.

Despite the storm, the celebration of “Ice Cream Days” in Le Mars with its parade and other events were able to continue on Saturday without interruption.

Brad Wurth of the Wurth Tree Services of Le Mars says he’s had a busy weekend.

“Got calls all the way up to midnight Friday night,” Wurth says. “Obviously couldn’t get out really much until daylight…We’re spending an hour up to three hours on a job.”

Wurth has been in the tree trimming business for more than 20 years and he says Friday’s storm was the worst he has seen. According to Le Mars Police, every street in town had a tree that was damaged by the storm. Three utility poles snapped off and caused extensive power outages. Most power was restored by Saturday, although utility crews were still working in some areas of Le Mars on Sunday afternoon.

There were very reports of structural damage from the storm and there were no reports of any injuries.