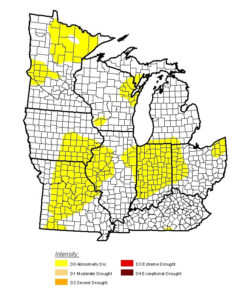 An expert on soil conditions says parts of Iowa are at risk of a “flash drought,” as conditions are very dry across the southeastern quarter of the state.

A climatologist at the National Drought Mitigation Center, Deborah Bathke, says the portion of the state in the category of “abnormally dry” has almost doubled since the start of June.

“The abnormally dry area was first introduced in the state of Iowa on May 24th,” Bathke says. “At the beginning of June, it was just over 14% and then last week, it was up to almost 27% of the state.”

While parts of Iowa are seeing near-normal amounts of rainfall, the southeast is lacking in moisture and farmers in that region need to stay alert. “For now, this is an awareness, just to note that conditions could get worse,” Bathke says. “I like to think of it as your warning or as your watch.”

Iowa’s southeastern quarter is considered abnormally dry, the lowest of five categories of measuring drought. It is followed by moderate drought, severe drought, extreme drought and then exceptional drought. Iowa hasn’t been in the grips of severe or extreme drought since 2012.

In parts of southeast Iowa, some farmers report the hot, dry spell is already beginning to impact crops and crack the soil. Temperatures have been at least five degrees above normal, keeping conditions abnormally dry over the past few weeks, while precipitation in many areas is 10 percent below normal and worse.