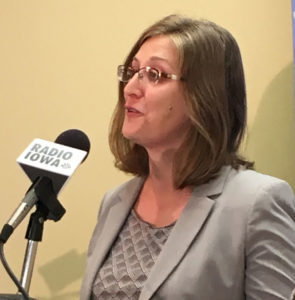 Rita Bettis, legal director for the ACLU of Iowa.

The American Civil Liberties Union of Iowa plans to lobby for a new state law or an amendment to the state constitution that would ensure felons automatically regain their voting rights after they’ve done their time.

“We’ll start today the political and legislative process that’s needed so that finally the thousands of Iowans who have completed their sentences can once again be full members of society and exercise their right to vote,” said Rita Bettis, legal director for the ACLU of Iowa. “It’s time.”

Bettis made her comments a few hours after the Iowa Supreme Court left Governor Branstad’s limited system in place for restoring voting rights to felons.

The ACLU and other advocates filed a lawsuit on behalf of a Montrose woman who’d been put on parole after a 2008 felony drug conviction. Kelli Jo Griffin voted in a 2013 municipal election. A jury acquitted Griffin of the crime of voter fraud, but Griffin agreed to be the subject of a civil lawsuit arguing she and other felons like her should be able to vote.

“Today’s decision serves as a call for a movement by the people and by our elected representatives for long overdue change to right this profound wrong,” Bettis said this afternoon.

More than 50,000 Iowans who’ve been released from prison after a felony conviction are currently barred from voting.

“Those of us who have a political voice must now act on behalf of those whose voices have been silenced through disenfranchisement,” Bettis said.

To get voting rights restored, a felon must get a $15 copy of their criminal record, fill out a form, download court information showing they’re up-to-date in paying court fines and fees — and then submit all that information to the governor’s office. Since Governor Branstad set up this system in 2011, about 150 people have completed the process and been cleared to vote. Bettis calls the process “daunting.”

“Many people feel like they need to speak with an attorney even to start the process. They sign (the documents) under penalty of perjury,” Bettis said. “The stakes are very, very high for people who would like to regain the right to vote and who are already quite marginalized and face enormous obstacles to reentering society.”

If legislators don’t pass a law making it easier to restore voting rights to felons who’ve completed their sentences, then the ACLU will start the long process of trying to amend the Iowa Constitution to accomplish that goal.

“We’re going to be pursuing all of the avenues that we have available to us to right this wrong,” Bettis said.

Iowa is one of just three states that bar felons from voting for life even after they’ve been released from prison. Governor Branstad has not commented on today’s.

Secretary of Paul Pate has praised the Iowa Supreme Court’s ruling. Pate says the ruling is in line with “150 years of precedence” and has been “reaffirmed” by Iowa voters and their elected representatives on many occasions.