You are here: Home / Fires/Accidents/Disasters / Number of confirmed tornadoes in the state well below average 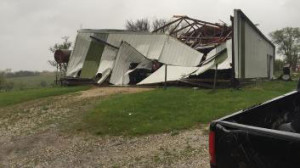 Building damaged by an April storm in Stanton.

Today’s the last day of June, which marks the end of the peak season for tornadoes in Iowa.

National Weather Service meteorologist Craig Cogil says the state’s only had about one dozen confirmed tornadoes this year, way below the average of 35 by the end of June. Cogil says it’s been a relatively quiet year so far.

“In general, we haven’t seen a lot of stormy activity across the state,” Cogil says. “We’ve seen low numbers with hail and wind damage as well. It’s just not been a really active storm season for the state.” After a lot of hotter-than-normal days during June, Cogil predicts something of a cool-down to start off July, along with maintaining the generally quiet weather year.

“We’ll still see storms on and off but nothing real widespread and temperatures certainly look to be at least at normal,” he says. “I’m certain as we head out, we’ll have a few periods of warmer than normal.” One, perhaps two tornadoes were reported last night in southwest Iowa. While the peak season is wrapping up, Cogil reminds tornadoes can strike any month of the year and we may still get several.

“On average, about another 20 or at least 15 to 20,” he says. “It’s the end of the peak season but certainly still a threat of seeing additional (tornadoes) through the end of the year.” On Veterans Day last November, there was an outbreak of tornadoes with 10 twisters being reported in Iowa.