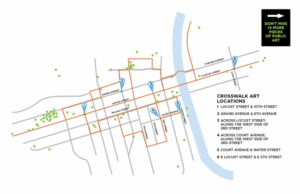 A new sort of tourist attraction is opening in Iowa’s largest city, a self-guided tour of artwork.

It’s called Art Route and the six-point-six mile walking tour will pass by 87 public art installations as it weaves from the west end of downtown Des Moines to the State Capitol.

Trina Flack, with the Greater Des Moines Convention and Visitors Bureau, says the project will set the city apart. Flack says, “We’ve created an attraction that no other city has, something that not only allows locals but visitors of all ages to experience our city.”

The Art Route will be designated by colorful circles on downtown sidewalks and painted chevrons pointing to the art works.

Tiffany Tauscheck, with the Greater Des Moines Partnership, calls the Art Route one-of-a-kind in the nation.

Officials in West Des Moines are making it a metro effort by developing a walking path around the 13 pieces of art located at City Hall.