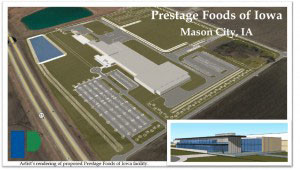 Drawing of Prestage plant that had been proposed for Mason City.

A North Carolina company announced this morning it will build a large pork processing plant in north-central Iowa’s Wright County.

Prestage Foods is heading to Wright County for its new, state of the art pork processing facility. Wright County Economic Development Director Bryce Davis says the county is excited to work with the company in constructing the $240 million pork processing plant, saying it will be a $43 million boost to the payroll of Wright County, and will have economic benefits to the surrounding counties as well.

Davis says agriculture is important to Wright County and they welcome the more than 900 new jobs to the area. Prestage has been looking at sites ever since the City Council in Mason City failed to approve a development agreement with the company.

Construction is scheduled to begin this fall, pending the finalization of county and state approvals, with first-shift operations starting in the middle of 2018. Prestage hopes to slaughter up to 10,000 animals per day once the plant is fully operational.