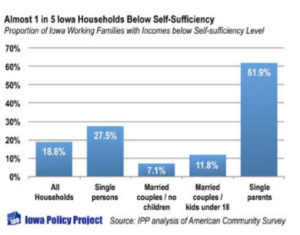 Another report is showing thousands of working Iowans are not making enough money to cover basic needs such as food, housing, health care, and transportation.

The “Cost of Living in Iowa” report, released today by the Iowa Policy Project (IPP), finds 19 percent of working households in Iowa do not earn enough to cover a “basic needs family budget.”

Peter Fisher is the author of the report and the IPP’s research director. “We found almost one in five Iowa working families do not earn enough to achieve self sufficiency,” Fisher said.

The IPP report indicates single parents in Iowa are struggling the most. “Approximately 12 percent of married couples with children living at home don’t earn enough. It goes up to 27.5 percent for single persons and a whopping 62 percent for single parents,” Fisher said. The report also finds 17 percent of Iowans living in urban areas do not earn enough to meet basic needs, while the figures rises to nearly 22 percent for those living in more rural Iowa counties.

“I think that reflects two things; one is we found higher costs of living in rural areas, largely because of substantially higher health insurance costs, longer commutes and higher transportation costs,” Fisher said. “When you combine that with poorer job opportunities and lower pay, in general, in rural areas and you end up with a significantly higher percentage of families struggling to get by.”

The IPP report follows a United Ways of Iowa report released last week that found nearly one-third of Iowans struggle to afford basic living expenses. Fisher says the United Way report included more Iowa families who are living in poverty. “Those fractions are not really comparable for a couple of reasons, one is they’re looking at all families, all households in the state, whether of not there’s somebody employed,” Fisher said. “They’re including senior families and families headed by somebody with a disability, for example, who can’t work. We’re looking only at families with a full-time worker, so we’re looking at working families.”

This is part 2 of a three-part report from the Iowa Policy Project. In April, the IPP released part one, outlining basic-needs budgets for various family types across the state.