You are here: Home / Agriculture / Number of bee keepers increasing in Iowa 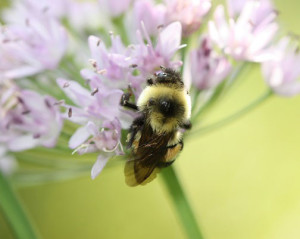 Populations of bees and monarch butterflies are still falling and many Iowans are concerned about the loss of those key pollinators.

While the number of honey bees is falling, the number of beekeepers in Iowa is on the rise. Dave Irvin, president of the East Central Iowa Beekeepers Association, says there’s a real buzz in interest.

“I just got a letter from the Department of Agriculture saying there’s more beekeepers now than two years ago,” Irvin says. “I think it was 127,000 beekeepers in the state. That’s up 15 or 20%.” Iowa bees are producing about 4-million pounds of honey every year, valued at more than eight-million dollars, but Irvin says most people don’t get into beekeeping to make money.

“There are a lot of people that are just, for some reason or another, interested in keeping bees,” Irvin says, “and there are lot of people interested in saving the bees. They don’t want to keep them at their house and they don’t want to manage them, but they might let you have (a hive) at their house if you manage it.” Irvin says pesticides called neonics are a big threat to pollinators.

“We should be encouraging not only farmers but everybody to just not be using any more of those chemicals than we absolutely have to,” Irvin says. “That’s at least 60% of colony collapse is the pesticides. Somebody told me, there’s 100 different kinds of pesticides in a bee hive, if you take one apart and test it.” Honey bees are responsible for the pollination of many Iowa crops, as well as home gardens and plants eaten by wildlife.

The economic value of honey bees as crop pollinators in Iowa is estimated at $92-million a year.