You are here: Home / Fires/Accidents/Disasters / Strong storms do damage across northern Iowa 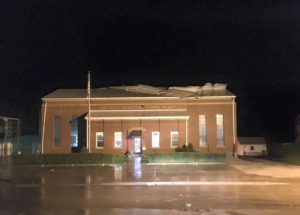 The roof was torn off the Villisa power plant.

“Some examples of damage, the city of Bancroft had quite a bit of damage with trees down, not just in roadways but in yards,” Penton says. “They had trees come down on houses and vehicles and we were seeing that throughout the county. This front that came through really did impact the entire area of Kossuth County.”

MidAmerican Energy reported hundreds of power outages across the region and Penton says many of those tree limbs that snapped fell on power lines.”A few of our cities throughout the county lost power last night and through the morning,” Penton says. “Lakota, Titonka, Bancroft and Burt — a couple of those cities have been restored but we’re working with the power company to get all of the power restored.” 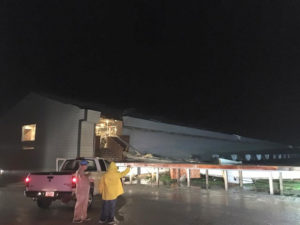 As yet, there are no reports of anyone being hurt statewide, despite all of the damage. “We had a fire department go out last night, Bancroft, to do damage assessment in the city to make sure there were no injuries to those living in the houses that the tree limbs fell down on,” Penton says. “Nope, no injuries reported.”

According to the National Weather Service, the strongest winds in the state were reported overnight in the Worth County town of Grafton at 68 miles-an-hour.

As homeowners and business owners survey the damage to their properties this morning, Penton says municipal teams have been at it for hours already. “There’s significant amount of wind damage that’s been done, wind damage to crops and quite a few trees have been blown down, large branches that are in the roadways,” Penton says. “

City crews around the county have been up most of the night, clearing streets so the roads are passable.” Significant wind damage is also reported in southwest Iowa, particularly in the town of Villisca. Montgomery County emergency management coordinator Brian Hamman says severe storms rolled through around 2 a.m. “I was out and followed the storms and entered the city of Villisca and found numerous tree limbs down,” Hamman says. “About the same time, the Villisca Fire Department was paged out to Forsman Farms, the chicken farm just southwest of town, for significant damage.”

“They’ve had the majority of their roof blown off,” he says. “They have a pitched roof on top of a flat roof and the majority of that pitch is off.” Downed trees and tree limbs dot the community and cleanup operations are underway. “The city of Villisca is taking care of all the tree branches that are down in the roadways and Forsman Farms has already contracted with a contractor to come out and make the repairs that are needed,” Hamman says. “Thankfully, it doesn’t sound like any of their chickens were affected and they still have electricity and are business as usual.”

Forecasters with the National Weather Service say more storms are possible later today across a wide section of Iowa.