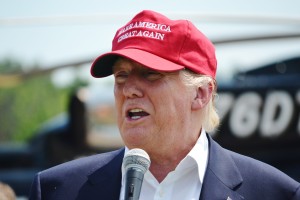 Governor Terry Branstad says Donald Trump represents the “best opportunity” Republicans have to win back the White House and efforts within the GOP to derail Trump’s nomination should stop.

“You know, the caucuses and the primaries are over,” Branstad says. “I think It’s pretty obvious that Mr. Trump has enough delegates to be the nominee of our party and we need to unite and support not only him but the entire ticket.”

Anti-Trump forces are trying to change party rules so delegates at next week’s Republican National Convention could vote for any candidate, rather than be bound by the results of primaries and caucuses. The committee writing convention rules is meeting in Cleveland today and tomorrow, so that decision is coming soon. Branstad’s also warning Iowa Republicans who continue to press the issue.

“My message is we want to preserve the Iowa ‘First in the Nation’ Caucuses,” Branstad says. “That’s of paramount consideration to me. It’s been a good thing for Iowa.”

And Branstad suggests Iowans who participate in the “Dump Trump” effort are giving fodder to critics of Iowa’s position in the nominating process.

Indiana Governor Mike Pence is one of the 30 governors expected to join Branstad in Iowa later this week for a National Governors Association meeting. Trump is considering Pence as a running mate. Branstad says Pence has been a “great governor.”

“He’s got background having served in the congress before as well,” Branstad says. “He’s one of many, I guess, under consideration, but I’ve always said I’m kind of partial to governors.”

Pence is scheduled to campaign with Trump tomorrow (Tuesday) and Pence faces a major deadline this Friday. That’s because Indiana law does not allow a candidate to both run for reelection as governor and as a vice presidential nominee. New Jersey Governor Chris Christie cannot run for reelection due to term limits in his state and Christie is also on Trump’s list of possible VPs. When comparing Christie and Pence, Iowa’s governor isn’t choosing sides on which would be the best vice presidential nominee.

“It’s like picking between your children, you know,” Branstad says. “Which one is your favorite?…In addition to governors, there are many other people who I think would be good.”

Branstad’s oldest son has been hired as the state director for Trump’s campaign, but the governor says he has no “inside information” on Trump’s decision on a running mate.