You are here: Home / News / Sanders supporters in Iowa react to his Clinton endorsement 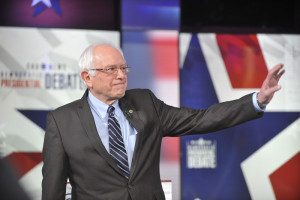 “It’s disappointing. I understand why he did this,” Humphrey told Radio Iowa. “There’s a lot on the line with this being the presidency.”

Humphrey is a delegate to Democratic National Convention in Philadelphia. He plans to cast his vote at the convention for Sanders.

“I represent thousands of people throughout Iowa that have cast their vote for Senator Sanders,” Humphrey said. “I’m going there to do the same.”

Barb Kalbach of Dexter is also a national convention delegate. Kalbach told Radio Iowa she and other Sanders’ supporters “have a job to do” in Philadelphia and that’s to pass a party platform that includes the policy priorities Sanders articulated during the campaign.

“Following the convention, our pressure will be needed to keep Mrs. Clinton’s feet to the fire as well as congress’ feet to the fire, to make the changes that we feel are important for the country,” Kalbach said.

“…It isn’t about Bernie, but it’s about the movement that he started, that he gave voice to for the rest of the country to follow. You know, when you have 1900 (national convention) delegates that’s a big voice to change the status quo.”

Chris Laursen of Ottumwa, another Iowa delegate to the party’s national convention, tweeted that he feels “sick…betrayed” by Sander’s endorsement. He used the “Never Hillary” hashtag at the end of his tweet.

Supporters of Sanders plan a protest march in Philadelphia and cities like Des Moines on Sunday, June 24 — the day before the Democratic National Convention starts.

At a rally today in New Hampshire, Sanders said Clinton “has won the Democratic nominating process” and “she must become our next president.”