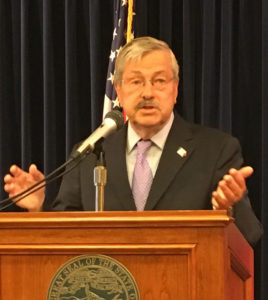 More than two dozen of the nation’s governors are scheduled to fly to Des Moines for the National Governors Association summer meeting. The kick-off event is an invitation-only reception tonight.

Iowa Governor Terry Branstad expects some private conversations among the governors about recent police-involved shootings in Minnesota and Louisiana as well as the ambush that killed five Dallas police last week.

“We have governors-only sessions and so I’m sure that will be a topic,” Branstad says, “and governors take the responsibility of protecting the safety of their citizens very seriously.”

There are a few open sessions as well that will cover topics like the “opioid crisis” and “generating jobs and economic growth.” Organizers have RSVPs from eight governors who are Democrats and 18 Republican governors for the events in Des Moines. According to Branstad, partisan squabbles are set aside at National Governors Association meetings like this one.

Late this (Thursday) morning, Branstad and other governors who are on a Pentagon advisory council are meeting at Camp Dodge in Johnston.

Indiana Governor Mike Pence and New Jersey Governor Chris Christie both registered to attend the gathering of governors at some point, but they may not make it. Both are rumored to be finalists on Donald Trump’s list of possible running mates. Trump will reportedly reveal his choice Friday.