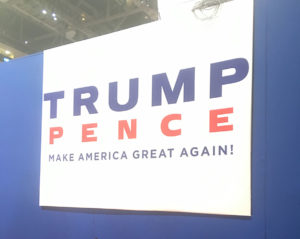 The speculation is over. Donald Trump is the Republican Party’s presidential nominee and Iowa’s delegates at the Republican National Convention in Cleveland helped make it happen.

“Pursuant to the rules, the state of Iowa proudly casts its 30 votes for the next president of the United States of America: Donald J. Trump,” former Iowa Secretary of State Matt Schultz, the chairman of the delegation, announced on the convention floor tonight during the roll call of states.

Schultz was a key Iowa supporter of Ted Cruz and a majority of the delegates from Iowa came from the Cruz camp. Cruz supporter David Chung of Cedar Rapids today said Trump’s “outsider” status has grabbed the attention of voters.

“Neither major party has really reached out in quite a long time and nominated someone who wasn’t a politician unless they were a general,” Chung said. “He tapped into something. People are frustrated, even those of us in the process have been frustrated with politics and politicians.”

On Monday, however, one Iowa delegate left the convention in protest. Randy Feenstra, a state senator from Hull who supported Cruz, too, this morning said it’s time to move on and focus on the General Election.

“We knew coming in that there was always going to be something to try to have the train to come off the tracks,” Feenstra told reporters. “And it’s good that didn’t happen.”

Four year’s ago, the Iowa delegation at the party’s national convention cast the majority of their votes for Ron Paul, who finished third in Iowa’s Caucuses. Schultz, the Iowa delegation chair this year, used Iowa’s moment in the spotlight as results were announced tonight to honor an Iowa institution.

“Let me just start by saying: ‘Go Hawks!” Schultz said, getting applause and cheers from his fellow Iowans.

Schultz also honored Terry Branstad — mentioning that he was “the longest-serving governor in U.S. history” — and Schultz called Republicans Chuck Grassley and Joni Ernst “the hardest working” members of the U.S. Senate.