You are here: Home / Fires/Accidents/Disasters / Tornado confirmed as cause of damage in Vinton 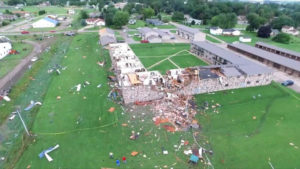 Building damaged by the storm in Vinton.

The tornado, with wind speeds of up to 135 miles-an-hour, was on the ground for just a couple of minutes, but caused a lot of damage over a 1.6 mile long path. No one was killed or seriously hurt even though the twister tore the roof off of an apartment building and badly damaged at least eight homes in Vinton.

There were two other tornadoes confirmed in Jackson and Scott counties. An EF-1 twister skirted along the southern edge of Andrew, taking down trees and destroying an ag coop building. A smaller EF-zero tornado flattened crops northeast of Eldridge