You are here: Home / News / Branstad a ‘no comment’ on Vilsack’s VP prospects 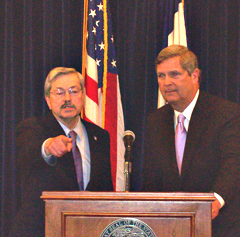 Iowa’s current Republican governor says he has had a good relationship with former Governor Tom Vilsack and he will not comment on Vilsack’s prospects for becoming Hillary Clinton’s running mate.

“It’s always been my philosophy that I should not comment on the other side’s internal politics, so I’m not going to. I never have,” Governor Terry Branstad said this morning. “..I’ve always said they should be able to choose whoever they want and then we’ll deal with it.”

Terry Branstad left office in January of 1999 after serving 16 years as governor and Vilsack served eight years after that. When both were former governors, the two joined on a few projects. This past January, the two appeared together at a statehouse news conference to tout Branstad’s idea for financing water quality initiatives in Iowa.

“We have a good relationship,” Branstad said today. “…We’ve worked together on water quality. We’ve work together on food and agriculture policy, but I’m not going to comment on the Democratic Party’s selection as far as the vice presidency.”

Republican Senator Chuck Grassley has praised Vilsack’s leadership at the USDA, but Grassley today said even if Clinton chooses Vilsack, Clinton’s still “going to be an Obama on steroids when it comes to regulation.” Grassley suggested Vilsack could do more for farm-state interests he would continue serving as a cabinet secretary.

Vilsack has been President Obama’s only agriculture secretary. Vilsack is rumored to be on Clinton’s “short list” for a running mate.