You are here: Home / News / Santorum lectures Iowa GOP delegates: You have no excuse (AUDIO) 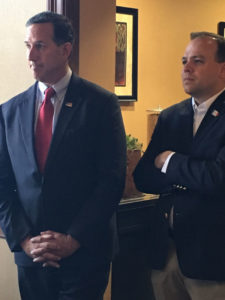 The winner of Iowa’s 2012 Caucuses has delivered a stern lecture to Iowa delegates at the Republican National Convention who’re still reluctant to support Donald Trump.

“If you’re looking for the perfect candidate, go home, read your Bible…and wait for the second coming because it isn’t going to happen until then,” Rick Santorum said at the conclusion of Wednesday morning speech in the lobby of hotel where the Iowa delegates are staying this week.

Santorum said the choice this year is either Hillary Clinton or Donald Trump and it’s time for Republicans to “step up and kick in” behind Trump.

“I know Iowa can go for Trump, but he’s going to need the Republican Party united and it’s not. Let’s just be honest. It’s not…and you have no excuse. You know better,” Santorum said. “If you didn’t know better before this speech, you know now.”

Iowa delegate Greg Heartsill, a state representative from Columbia, backed Ted Cruz in the Caucuses, but Heartsill said Santorum’s message is “spot on.”

“We all need to understand that this is the reality of our political process,” Heartsill told Radio Iowa. “…Sometimes you need to say something to shock people back into reality and I think what Senator Santorum had to say did that.”

“I didn’t feel like he was restrained by, ‘Oh, I might have to answer for this down the road,’ and I appreciate that,” Schultz told Radio Iowa. “It was blunt and honest, I think — from the heart.”

Delegate Marlys Popma of Kellogg said her “dial is moving” toward Trump, but she’s not there yet.

“And it doesn’t have to do with any other candidate,” Popma said. “I have to be comfortable that in the face of my Lord, I can cast a vote that God would say: ‘Well done, my good and faithful servant.'”

“I came to Cleveland with an open mind and an open heart, quite frankly. I have also felt like things are starting to heal, so to speak,” Schultz said. “I guess, actually that is the point of a convention.”

On Tuesday night, all 30 Iowans at the convention were tallied during “roll call” as Trump delegates. Trump will deliver a speech tonight in Cleveland to formally accept the GOP’s presidential nomination.