You are here: Home / Business / Another data center coming to West Des Moines 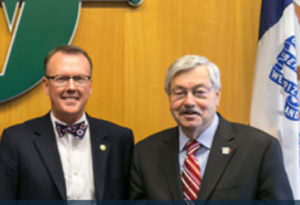 Microsoft will build a four-phase center that will end up being nearly two million square feet by the time it is done in 2022. It’ll cost between $1.5 and $2 billion and sit in Warren and Madison County. It will be the third data center in the city along with one in Altoona and one in Council Bluffs.

Governor Terry Branstad says the new data center will create construction jobs as it is built and eventually some 130 permanent jobs. “We’re very excited, we want to continue to grow the economy and bring these high-tech jobs to Iowa,” Branstad says. 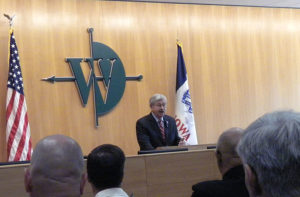 The governor says the history of the other three data centers helped sell Microsoft on the new center.

“Once they saw the benefits of Iowa and the fact that we have low-cost reliable energy, we’re a good low-cost place to locate. And then it’s renewable — we lead the country in terms of renewable energy — over 31 percent of our energy generated by wind,” Branstad says.

West Des Moines Mayor Steven Gaer says a lot of planning went into getting the center in his city and it was not a given Micrsoft would build here. “It’s not, when you look at these sites, the other Microsoft data center, we’re spending 60 some million dollars infrastructure, and this one is probably going to be more than that,” according to Gaer. “So, it is a major undertaking from an infrastructure standpoint to get streets, water, sewer, all the utilities to these sites. And there’s not a lot of communities that have the financial wherewithal and the skill set to get it done.”

Known as “Project Osmium”, it will be the largest data center Microsoft has ever built in the United States. Gaer says the city did not offer any property tax rebates to the company to keep with its longstanding policy. “In the early two-thousands we’ve had companies that moved because we wouldn’t give them tax abatement…and they moved from our community. So, we have lost businesses from that, but that’s just not our business model. Everybody needs to contribute to the quality of what we have here,” Gaer says.

Waukee has been one of the fastest growing cities in the state, and Gaer says that means they have to be prepared. He says they have to plan ahead and meet frequently to map our what the city is going to do from a planning and investment standpoint. The state Economic Development Board approved $4.7 million dollars in tax benefits for the project.

The announcement of the new data center comes on the same day that state unemployment numbers showed another increase to four percent. Manufacturers lost more jobs last month and Governor Branstad says that is a concern.

Branstad says it all has to do with the loss of farm income as farmers are not buying equipment and manufacturers like John Deere, Kinzee and Vermeer have to lay people off. He blames the Obama Administration and the cutting of the amount of renewable fuels required to be sold as a major reason for the drop in the farm income.

Branstad returned from the Republican National Convention in Cleveland for today’s announcement and says he talked with Republican presidential nominee Donald Trump about the RFS and its importance to the farm economy.