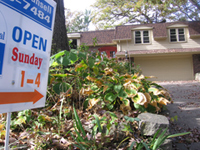 Home sales and prices continue to rise across Iowa. A report from the Iowa Association of Realtors (IAR) shows 4,998 homes were sold across the state last month. That’s up from 4,817 home sales in June of last year.

The median sale price for a home sold last month was $156,000 as compared to $153,000 in June of last year. Iowa is mirroring the nation’s housing market — as homes are selling quicker, with rising prices, and low inventory across the country. But, Clark say the Iowa housing market is not as volatile. “We’re very blessed in Iowa that when prices go up, they usually go up in a very orderly manner. And when they go down, they don’t go down as dramatically as in other areas,” Clark said.