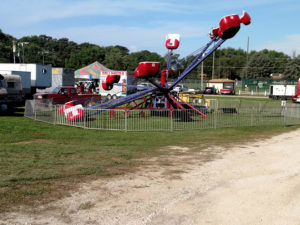 Five people where injured when a bucket on the Octopus ride dropped.

Federal and state inspectors today will look over a ride at the Cass County Fairgrounds that malfunctioned and left 5 people injured Sunday.

Five of the people on the Octopus ride were sent to the Cass County Memorial Hospital. One of the injured, a teenage male, was later transferred to a hospital in Omaha for further evaluation and treatment. Atlantic Police Chief Steve Green says a pin on top of the ride apparently sheared off, causing some of the buckets carrying passengers to slam into the ground.

“We’ve been fortunate. We haven’t had anything like this at the Cass County Fair in my memory and I’ve been coming to this fair since I was a kid. It’s just one of those things, I guess, ” Green says. 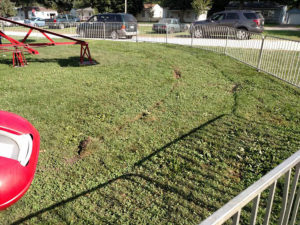 Marks on the ground after the ride broke.

Deep gouges could be seen on the grass where the bottom of the buckets dug into the ground. Green says the inspectors are coming from the Iowa Department of Labor and U.S. Consumer Product Safety Commission.

The names of the injured have not been released, but reports from law enforcement said the injured included an adult female and four teens — two females and two males. Green says two of the teens walked away from the accident. Their mother took them to the hospital.

The ride is closed on this, the last full day of the Cass County Fair.