You are here: Home / Human Interest / An overpopulation of cats causing problems for cities 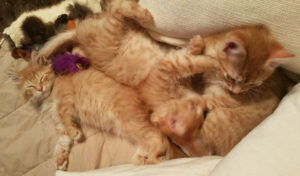 The manager of the animal shelter in Cedar Rapids is asking people with cats to do whatever they can to keep them before considering bringing them to the shelter.

“We’re just overrun with cats and kittens here this summer,” Webber says. “We’ve got over 200 in house right now and they keep coming in the door. I even have them out in foster homes and we can’t keep up with the influx of felines this summer.”

She has an idea of why there are so many kitties around town. “I’m thinking that it might be partially due to the fairly mild winter that we had — so cats continued to breed through the better part of the winter and the early spring months. Usually we don’t see such a huge influx. Spring and summer is always a heavy time for cats and kittens, but this has just beaten everything we’ve had for quite a few years,” Webber says.

Webber says most of the cats are strays, but they’ve also had several people who brought in what were their pets. She says her eastern Iowa city isn’t the only one facing the issue.

“I’m on the board of directors for the National Animal Care and Control Agency, and we’re seeing this problem all across the nations this year. It’s a problem in every community,” Webber explains. “So, it isn’t just Cedar Rapids, it’s all throughout Iowa and the United States.”

Webber says the overabundance of cats takes of lot of resources and leads to other problems. She says having so many cats in one place can lead to the animals having stress, and that leads to immune system problems for the cats and they have to put them on medications. “And that really takes a toll on staff.” She says everyone can help by taking steps to control the cat population.

“The very best thing anybody can do is to just spay or neuter all of their pets — not just cats — but dogs as well. It’s the only way to cut down on the overpopulation of unwanted animals… spay or neuter is just the only way you can do it,” Webber says. Webber says your can get help from you local animal shelter to deal with behavioral issues from litter box problems to inappropriate scratching and territorial conflicts before deciding to get rid of your cat.

Here are some other tips for dealing with stray cats:

-Do not feed them, as feeding stray cats only attracts more cats, as well as raccoons and other wildlife, which not only will cause animal confrontations but spread disease. And you neighbors won’t be happy about the noise, the torn up flower beds and the unpleasant odor that comes with it. And she says

– Leave baby kittens alone. It’s not unusual to discover unattended kittens or a single kitten seemingly abandoned by the mother. Wait and watch first. Mom is usually lurking in the shadows waiting for you to leave. It may take several hours before she feels it’s safe enough to return for her kittens. Mother’s milk is the best food for the kittens, so keeping them together is going to be the best solution for all. Only remove the kittens if you feel they are in immediate danger.