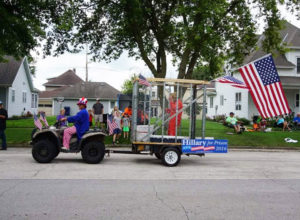 Kyle Julin posted this picture and others of him pulling the float on his Facebook page.

A float in a Carroll County parade this weekend celebrating the Arcadia Fire Department’s 100th anniversary is drawing nationwide attention.

The float featured a man in an orange jumpsuit wearing a mask of Democratic presidential nominee Hillary Clinton while inside a cage.

It had a sign on the side that said “Hilliary for Prison” 2016. Kyle Julin of Manilla told the Caroll Times Herald the float was his idea and he got help from his friends Josh Reetz and Adam Corky, who wore the Hillary mask.

The paper says 400 water balloons were given to people along the parade route to throw at the fake Hillary. The newspaper says the float received “both accolades and criticism.” Julin has several pictures of the float on his facebook page. The Herald story is featured on the Drudge Report website.