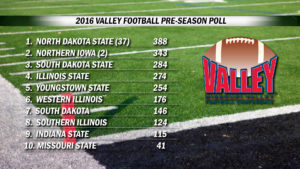 North Dakota State took home the most points in the preseason poll with UNI coming in second. The top-three was rounded out by South Dakota State, followed by Illinois State in fourth and Youngstown State in fifth.

All five of UNI’s preseason team selections earned all-conference in 2015 with all five looking to make contributions to a veteran UNI squad. Seniors Aaron Bailey and Robert Rathje highlight the offensive preseason first-team while Karter Schult and Sam Kuhter were named to the defensive team. Senior running back Tyvis Smith also earned honorable mention status to round out UNI’s selections. 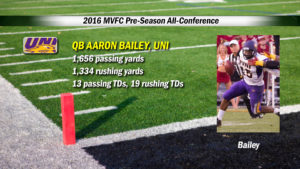 Bailey, Rathje and Smith worked together in 2015 to create a potent offense that ranked No. 12 in first downs offense, No. 25 in red-zone offense and No. 15 in rushing offense. With all three returning to the field this fall, Panthers fans will get a chance to see an explosive offense take on some of the best FCS programs in the country.

Bailey and Smith made a hard tandem to cover, with Bailey ranking in the top-40 nationally in passing efficiency and yards per completion along with a No. 8 rank in points responsible for. He will be handing off the ball to Smith who finished 2015 with 1,079 yards on the ground, ranking No. 25 in the FCS in rushing yards per carry with a tough 5.93 per attempt. Rathje is the anchor of the offensive line this season after starting at center since 2013.

On the other side of the ball, Kuhter put the Panther defense in striking position in 2015. He finished the year ranked No. 15 in the FCS in punting after landing seven touchbacks, 26 punts inside the 20-yard-line and 15 of 50-or-more yards to earn second-team All-MVFC in 2015.

Thanks to Kuhter’s punts, opposing offenses didn’t have much of a field to work with, allowing the UNI defense to do work themselves. Led by Schult, the Panthers ended 2015 with the No. 26 ranked total defense in the FCS. The Tripoli, Iowa native ranked high individually as well, finishing the season in the top-15 in tackles for loss and sacks.

The Panthers begin the season on Sep. 3 in Ames, Iowa when they take on Iowa State at 7 p.m. CT. MVFC play will start on Oct. 1 when UNI hosts Southern Illinois at 4 p.m. for UNI Homecoming.