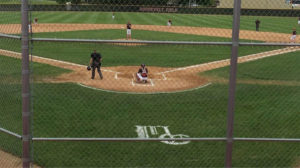 Mason City is hosting the Iowa High School Baseball Coaches Association’s All-Star Series. Four teams made up of 16 seniors from across the state will play the next four days at Roosevelt Field in their final games as high school players.

Former Newman coach Gary Nyhus is one of the event’s organizers and says people will be able to see the best players in the state now through Sunday. “It’s a hidden gem this all-star series, it really is. The parents that come to it, all the people who go to the games don’t realize it until they are a part of it,” Nyhus says.

Roosevelt Field for a number of years hosted the state’s spring baseball tournament and has been home for Mason City High and NIACC baseball teams for decades.

Nyhus says the players have to apply to be considered for the all-star series. He says they usually pick the teams on the day the all-district teams are picked and they make the selections. They pick 16 kids who all will get to play.

The teams are divided up into Small Schools East, Small Schools West, Large Schools East and Large Schools West. The teams will play a round-robin tournament Thursday through Saturday, with consolation and championship games played on Sunday. Doubleheaders will start at 5 o’clock Thursday and Friday, with Saturday’s doubleheader starting at 3 o’clock. The consolation game will be played at 10 o’clock Sunday with the championship game at about 12:30.