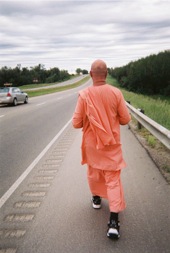 Over the past few weeks, Iowans may have spotted a bald man in a long orange robe walking along the highway, sidewalk or bike trail. The man known as The Walking Monk has completed his trip across the Hawkeye State and is heading into Nebraska.

Bhakti Marga Swami says he took up the tradition of extreme walking some 20 years ago.

“I’m walking to connect with people and to make a green statement,” Swami says. “I’m trying to say it’s not a bad idea to use this body a little bit more of what it’s meant for, it’s meant for walking. Getting back to basics, that’s the message. Slow down. We’re moving a little too fast. Take some time for self-reflection.”

Swami has spent 43 years as a Hare Krishna monk and started this latest walk in Boston. He’s seen plenty of Iowa landscapes since mid-July while following the Old Lincoln Highway route.

“Lots of corn,” he says. “I really enjoyed the bike trails. I find the people in the Midwest are really sweet. They’re really nice to me. There’s not going to be a strong judgemental attitude towards me, even though I’m wearing my orange robes which is part of our tradition as a monk.”

Swami says a sense of humor is key as that orange robe has led to him being mistaken for a prison escapee several times along the way. This is his first time walking across America.

“People have been really nice and if the big American dream is somewhere, it seems to me so far, it’s in Iowa and it seems to me, people are leading a pretty neat life,” Swami says.

His walking travels have taken him to Israel, Ireland, Trinidad, Guyana and he has walked across Canada four times.

Karla James contributed to this report.