You are here: Home / News / Loebsack says he’s no ‘Pollyanna’ but he sees compromise ahead in congress 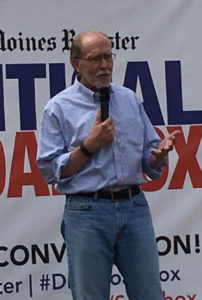 Congressman Dave Loebsack of Iowa City says he’s a Democrat who wants more Democrats elected, but after the election’s over, Loebsack says voters tell him they want the “partisan nonsense” to end.

Loebsack made an appearance on The Des Moines Register’s Soapbox at the Iowa State Fair this afternoon.

“Yeah, you want a Republican or you want a Democrat or maybe you want a Libertarian — whatever the case may be, but what I hear from you folks is you also want us to sit down after this is all over and figure out how to move the country forward,” Loebsack said.

Loebsack told the crowd he’s no “Pollyanna” who is “overly optimistic.”

“But I think that when we go back in January there’s going to be such a critical mass of the American people who want us to do the right thing,” Loebsack said, “that I think most of the politicians, they know that that’s true, but I have some optimism that we are going to get things done.”

Boosting federal spending on infrastructure and education as well as taking steps to protect America from its enemies abroad are at the top of Loebsack’s list of likely areas of bipartisan cooperation when congress reconvenes in 2017. Loebsack currently represents the 24 counties in the second congressional district in southeast Iowa. He faces Republican Christopher Peters in this fall’s election.