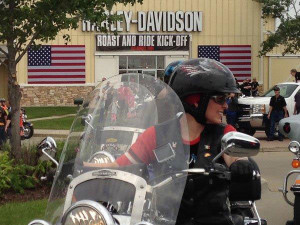 Republican Presidential candidate Donald Trump is returning to Iowa to for an event hosted by U.S. Senator Joni Ernst.

Trump will be the featured speaker at Ernst’s second “Roast and Ride” fundraiser on August 27th along with prominent Iowa Republicans. Ernst and others ride their motorcycles to the Iowa State Fairgrounds for a what’s billed as a family friendly hog roast to honor veterans.

Wisconsin Governor Scott Walker joined Ernst last year on the ride, no word on whether Trump will hop aboard a Harley to join Ernst.